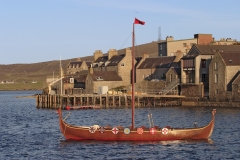 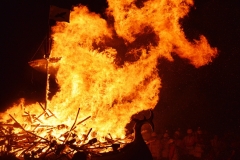 Being in residence with us at The Grand means you are in the heart of Lerwick.

The Grand gives Shetland visitors the ideal opportunity to be immersed in life in Shetland’s capital. Whether you want to experience fresh food at No.88, get merry at the Lounge or buy Shetland knitwear at Anderson&Co, The Grand is a mere minute or two away from it all! You can find a fuller list of what is within The Grand’s proximity on the Living Lerwick website.

If you happen to just want to take in Lerwick, its history and its sights then you are in for a treat as well.

Taking a short walk along Da Street you can visit the home of BBC Shetland‘s DI Jimmy Perez. While he may not actually live there the history that comes with the Lodberries along from his home, Bain’s Beach & Queens Hotel is even more fascinating and it stretches back as far as the 1600’s.

As a growing town on the seafront, many Dutch seafarers and fishermen would take rest in Lerwick. In those days alcohol was illegal so they would bring it in abundance to trade with locals and these illicit goods would be smuggled through the lodberries and tunnels beneath our feet. Locals in Lerwick would binge on the drink and eventually a decree would come from the ancient capital of Scalloway that trade with the small town must cease immediately and the town was left in ruins.

Lerwick bounced back a century on though and the Isles’ government would setup in Lerwick, becoming the capital. Looking across from the lodberries you can see Bressay, it’s a short 5 minute ferry away and has a great pub and restaurant called the Maryfield.

On the opposite end of Da Street, you can find Lerwick’s Town Hall, the Museum, and the local cinema (which also offers light bites and a bar!). In the middle of all three of those you can find the local bus station which would be your place to go if you wanted to experience Shetland past Lerwick (and there is plenty of it!). Out the North Road you can take in the sunny Westside, walks of the north, The Original Cake Fridge, and much more! Heading out of Lerwick’s South Road gives you the treats of Sumburgh Head, home to puffins at different stages of the year and a cafe that operates out of the Lighthouse. You can check bus timetables on the ZetTrans Website.

You can find out more about which cookies we are using and our policy, please check here.

This website uses cookies so that we can provide you with the best user experience possible. Cookie information is stored in your browser and performs functions such as recognising you when you return to our website and helping our team to understand which sections of the website you find most interesting and useful.

Strictly Necessary Cookie should be enabled at all times so that we can save your preferences for cookie settings.

If you disable this cookie, we will not be able to save your preferences. This means that every time you visit this website you will need to enable or disable cookies again.